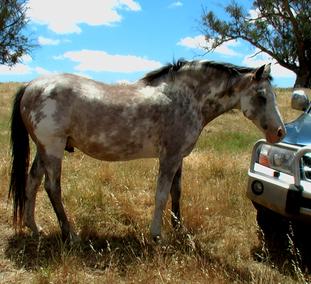 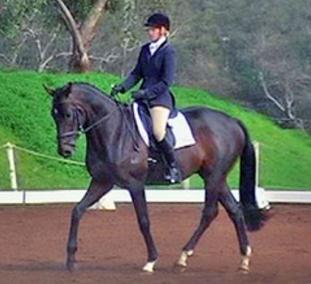 Kitilintock Stylish Lad ((“Laddie”)  was selected by Kelly Newton-Wordsworth as the foundation sire for Williams River Horses. He was an outstanding stallion bred on stock horse bloodlines, with film star looks, presence, movement and talent. He won many awards at breed shows exhibited by his former owner Jean Clarke.
Laddie was sired by the paint stockhorse Kitilintock Calypso, who has a linage like many stockhorses that include outstanding thoroughbred lines such as Heroic (who sired a Melbourne Cup winner and champion milers) and mixed bred station horses. His dam was a station mare (“Snowcat”) from South Australia who produced a run of supreme champion halter horses whatever stallion she was mated to. These horses featured old fashioned station breeding when horses were part of working life on cattle stations, and the horses had to be brave, sound, quick minded and obedient, all qualities needed in modern eventing and all round horses. “Laddie’s” progeny, such as Williams River Christmas, Shadowfax and Hidalgo, have all been very natural jumpers, and many youngsters by him have jumped out of cattle yards (almost head height) before they have even been trained for jumping.
Williams River Horses has a specific breeding for eventing and we are proud to have stock horse breeding in our herd. Western Australia has produced some outstanding event horses with stock horse bloodlines including “Ringwould Jaguar” (Olympic Silver Medallist 2008 and winner Melbourne 3DE 2006 with Sonja Johnston), “Sir Waraba” (13th at Gawler World Championships), and “Legal Star” (winner of Adelaide International **** 2014 with Jess Manson).
“Laddies” influence on Williams River Horses continues through some of the horses by our current stallions being coloured (roans and paints), the natural jumping ability and quick mindedness he brought to our herd, and the “outback spirit” he has put into our horses that is best summed up in these lines from the poem “The man from Snowy River” by Banjo Paterson, describing the horse used in that legendary ride:-

“He was hard and tough and wiry—just the sort that won‘t say die—
There was courage in his quick impatient tread;
And he bore the badge of gameness in his bright and fiery eye,
And the proud and lofty carriage of his head”